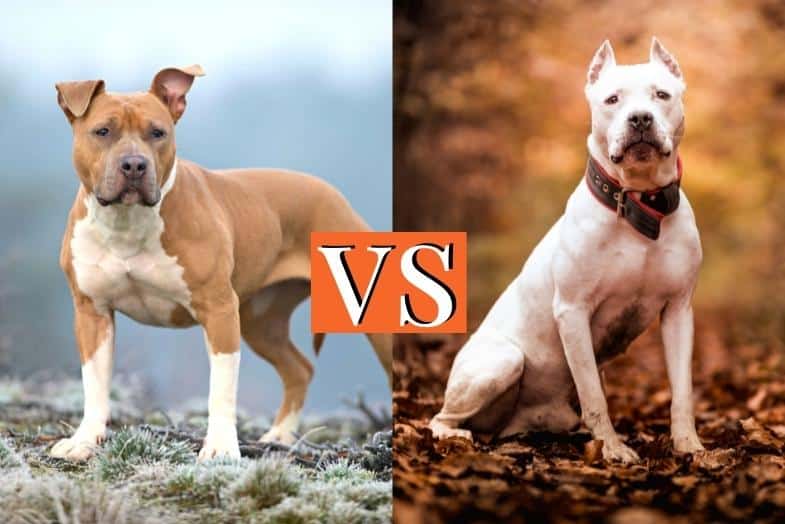 Thinking about the various Pit Bull type dogs can get pretty confusing. So, this article will explore the Amstaff vs Pitbull: Are American Staffordshire Terriers + Pitbulls the same breed? Firstly, both breeds share a common ancestry, yet a few subtle characteristics distinguish each breed.

The AmStaff and the Pitbull are both bully breeds or pitbull-type dogs. As a result, you’ll discover they share a lot of characteristics. The American Staffordshire Terrier is slightly shorter but significantly heavier. In contrast, American Pitbull Terriers are smaller, lighter, and more athletically built.

Both breeds resemble one another in appearance and can appear intimidating to people unfamiliar with the dogs. Despite this, both breeds have enormous hearts and are surprisingly sensitive.

Because they look so similar, it’s easy to confuse the two breeds. If you introduce an American Bulldog, things get very confusing.

Is an Amstaff the Same as a Pitbull?

Firstly, the history of both dogs stretches back to England in the early 19th Century. In those days, it was common for dogs such as the Old English Bulldog to entertain the people by baiting and attacking bulls and bears. However, once this was outlawed in 1835, dog owners and breeders turned to dogfighting. Breeders needed an agile and aggressive breed, so they crossed the Bulldog with local terriers.

Also, there was a split between breeders during this period. Some breeders preferred the name American Pit Bull Terrier, named as such by the UKC.

While they still have a great deal of heritage in common, breeders have bred two distinct dogs for the last 50 years.

In the UK, we have a dangerous dog list. There are currently four breeds on the list, but the Amstaff is not one of those. However, the American Pitbull Terrier is. You have to be somewhat cautious in the UK because the legislation says it is what the dog looks like, not the breed type.

Which Is Bigger: Pitbull or Amstaff?

Unless you know both breeds exceptionally well, you would be hard-pressed to separate them. However, the American Staffordshire Terrier is the bigger and heavier dog. In addition, they have a more calm personality than the American Pit Bull Terrier.

Both dogs are well-balanced. Their large, square heads, muzzles, and well-defined muscles, especially in the Amstaff, give them an intense look.

In addition, breeders of both dogs tend to crop their ears. However, the demand for puppies with cropped ears is diminishing. Cropped ears give the impression of a more aggressive dog, which, combined with their history, isn’t good. But, if their ears aren’t clipped, they tend to be rose-shaped or half-pricked.

While the Amstaff and American Pit Bull are outwardly similar, significant characteristics distinguish each of these Pit Bull breeds!