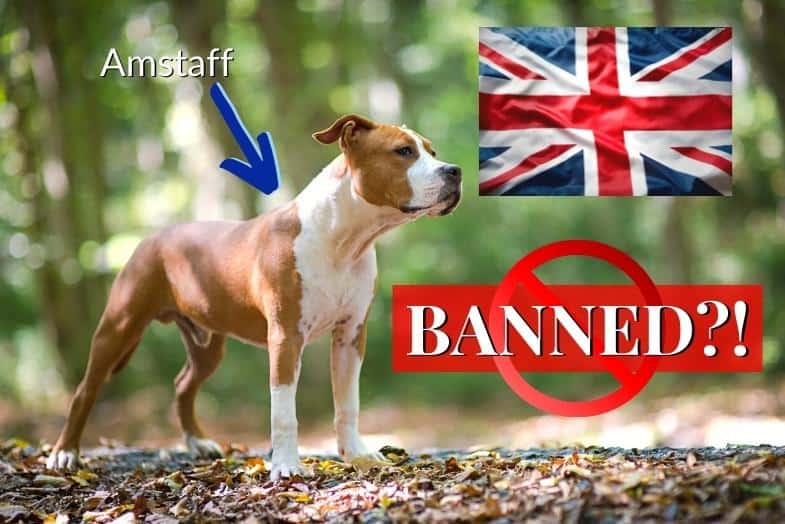 Are Amstaffs banned in the UK? The quick answer is no, they are not. But we should delve further and provide more information for the situation for the Amstaff.

There are four dogs on the UK’s Dangerous Dog list. These dogs are banned in the UK and you’re unable to breed them. They are the Pit Bull Terrier, Japanese Tosa, Dogo Argentino and Fila Brasiliera.

While discussing the UK’s banned list, let’s look at what the government says about certain dogs. It’s also against the law to:

Here’s where it gets tricky for the Amstaff and similar dogs. Despite naming four separate breeds, the government can ban your dog depending on what it looks like, not its breed or name. So, if you own a dog that looks like a Pit Bull Terrier, it could get banned.

It is difficult to differentiate between an Amstaff and a Pit Bull Terrier unless you’re a dog expert or know the breeds exceptionally well.

What Is an “Amstaff”?

The American Staffordshire Terrier is a medium-to-large, highly muscular and robust dog with a broad head, strong jaws and well-defined cheek muscles. Known as the Am Staff or Amstaff, this breed is noted for its strength and bravery, but it is also known for its friendly and devoted nature.

Despite its rough exterior and ferocious dogfighting history, the American Staffordshire Terrier is a kind and loving dog, particularly to its family.

The English Staffordshire Bull Terrier’s original owners worked on farms and protected property, and they took the Staffy breed to America in the late 1800s. However, Americans preferred a larger version of the dog.

Creating a dog that’s good with people has been a primary goal of ethical Amstaff breeders for decades. Many Amstaffs are known for their trustworthiness with their families because of careful breeding. The typical Amstaff member is fun, boisterous, and forgiving.

However, as with any dog, children and Amstaffs should never be left alone together, even with a well trained and socialised dog. They may be good with family and children, but that doesn’t extend to other dogs, so Amstaffs bear watching.

The Am Staff is not great at obedience. If you try to force training onto an Amstaff, you won’t succeed. Therefore, turn it into a game, they’ll join in, and you will get the result you need.

The problem with any dog stems from irresponsible breeders and the type of owner. Yes, the Amstaff is a Pit Bull type, and we all know the reputation that dog has endured but does any of this make the Amstaff breed dangerous?

Not necessarily. Even a Chihuahua can be vicious (and plenty are), but whereas a Chi might leave a small bite scar, an Amstaff attack might be fatal. Like any dog breed, if they are from a good breeding line, well trained and socialised with a responsible leader for an owner, an Amstaff is no more dangerous than any other breed.

Are Amstaffs Banned in the UK?

Strictly speaking, no, they are not. However, Amstaffs are a Pit Bull type, which could mean the police could take the dog away, and you would have to go to court to prove the dog was not a banned type. Losing the court case would land you with a criminal conviction, fines and possibly even a jail term; the court would order the dog to be destroyed.

Are Pitbulls Banned in the UK?

The government have banned Pit Bulls in the UK, and you are not allowed to own, breed, crossbreed, abandon or sell a Pit Bull in the UK. This law is part of the Dangerous Dogs Act 1991.

Pitbulls are lighter, weighing between 30 and 65 pounds. The American Staffy can weigh anything from 40 to 70 pounds. The Pitbull is taller and slimmer than the Am Staff, who is shorter and stockier.

Both are frequently mistaken for other pitbull mixes or American Bullies.

Both types are friendly, boisterous dogs who love their families. They both have a great attitude towards kids as well.

They enjoy running around and playing interactive activities, so both of these dog breeds will keep you entertained for hours, and you’ll need to do the same for them.

While they are friendly with people, they can become fearful of other animals they perceive to threaten them or their families.