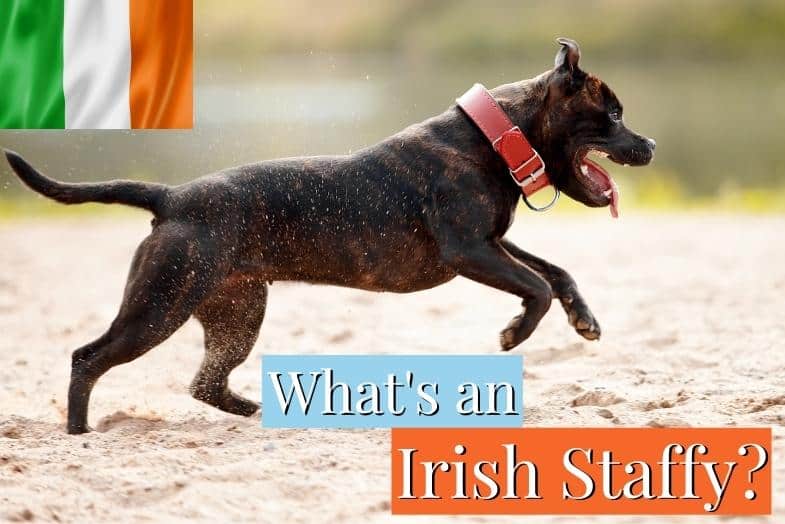 Staffordshire Bull Terriers, so named for its native county of Staffordshire in the Midlands of the UK, was also home to the breed’s largest population and the most influential breed organisation. This well-known and exceptionally popular breed originally served as a vermin hunter and a key participant in the brutal pastime of dogfighting.

Is There Such a Thing as an Irish Staffy?

Staffies were taken over to Ireland to compete in the Irish Kennel Club trials. In 1947, enthusiasts formed the Staffordshire Bull Terrier Group of Ireland; however, they disbanded in 1956 due to disagreements within the club resulting from issues with breed guidelines, a common enough problem that saw many fledgling dog breeders clubs close down.

However, closing down the breed group didn’t reduce the enthusiasm of Staffy owners in Ireland.  So, is there such a thing as an Irish Staffy? Because there were now two distinct types of Staffordshire Bull Terriers in existence when the UK breeders sought Kennel Club breed recognition, the Kennel Club had to choose between the English type and the more athletically inclined Irish variety.

What’s the Difference Between a Staffy and an Irish Staffy?

There are several differences between the Irish and the English Staffy.

The Irish Staffy is a breed type, not a breed.

The dogs are often thinner and taller than the normal SBT. No official Kennel Club recognises the dog as a separate breed.

There is a registration from the Intercontinental Kennel Club. However, this is not an officially recognised kennel club, the same way as the UK Kennel Club or the AKC in America.

Many Irish owners who breed these dogs prefer to stick to the old 1935 SBT standard, which results in a slimmer, taller dog.

As for colour, Irish Staffies come in various colours, pretty much the same as the English Staffy.

Is an Irish Staffy a Pitbull?

The Irish Staffy is a taller, slimmer version with a narrower head than an English Staffy; the dog bears no resemblance to a Pitbull with those looks.

People referencing these dogs appear to believe the dogs are called Irish Staffies to circumvent the law regarding Pitbulls (banned under the Dangerous Dogs Act).

None of this considers disreputable breeders who cross standard Staffies with other dogs. They then sell the resulting hybrids (crossbreeds) as pedigree Irish Staffies to unsuspecting buyers.

The Irish Staffy will still only be medium-sized dogs even though they are larger than an English Staffy.

Irish Staffies are still muscular dogs, even though they are taller and have a slimmer build. They grow up to twenty-four inches at the shoulder. However, I want to stress that the size can vary because their appearance will depend on the parent breeds if they are a crossbreed.

These dogs can weigh between fifty-five pounds up to seventy-five pounds, with females weighing less than males.

Because Staffies are relatively healthy dogs, they have a good lifespan of ten to fifteen years. Naturally, this does not consider the dog’s lifestyle, diet, and owners’ attention. In addition, without knowing which other dog breed is involved, it’s challenging to predict a dog’s lifespan.

Staffordshire Bull Terriers are not a good breed for every potential owner. The breed does require an experienced hand to guide them properly. They are loving people-pleasing dogs yet have a stubborn streak in them. They are also intelligent and are very trainable, but patience, consistency, and reward-based training are an absolute must with a Staffy.

From an extremely young age, they will need socialising correctly; they must be allowed to mix with other dogs from a young age to ensure none of their dog aggression comes to the fore. Even then, owners will need to be wary of their Staffy around other dogs.

Because of their attachment to their human family, Staffies don’t typically do well when left alone for long periods. This breed expects to go everywhere with you and can be pretty destructive with their powerful jaws if left alone for too long.

Staffies need sufficient physical and mental exercise every day to stimulate them and tire them out. If you are not an active, outgoing family, this is not the best choice of dog breed.