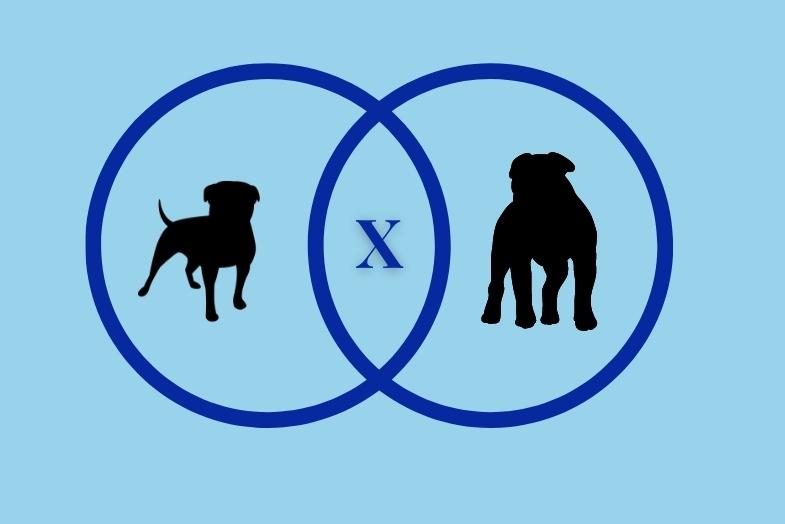 The Staffy American Bulldog was originally bred as a working dog, but due to their loyalty and loving nature, they make great companions and family dogs. This crossbreed is also relatively new, only being heard of since the 2000s.

Let’s get into everything you need to know about the Staffy American Bulldog.

What Is a Staffy X American Bulldog?

A Staffy X American Bulldog is a cross between the Staffordshire Bull Terrier and an American Bulldog. This dog breed is strong and muscular, easy to train and has lots of energy. It’s known for being a breed full of character and personality.

What Is a Staffy American Bulldog Cross Called?

With the Staffy American Bulldog, both parent breeds actually stem from the same ancestors, so they share a lot of similar traits. However, its physical characteristics resemble mostly that of the Staffy, such as its wide head and dark colours.

An important thing to note about this Staffy crossbreed is that it is not for the faint of heart; it’s high intensity, high energy, and requires a high dietary intake to keep them happy and healthy.

If you are not a fan of dogs that shed, this breed is not for you. Many think that the American Bull Staffy, due to its short coat, wouldn’t shed too much, but that’s far from the truth. Their fur is also thick and coarse, so it can be scratchy on your skin.

The best way to maintain their coat is to use a slick brush; this will minimise shedding and make their coat look healthier.

American Bulldog Staffies must be socialised and trained from a very young age. Without either of these, they can become extremely destructive and antisocial. Males can also have a problem getting on with other male dogs, so bear that in mind when socialising your puppy.

As long as you train your Staffy American Bulldog as soon as possible, they are easy to train and socialise well with people and other dogs.

Good training and early socialising are vital for the Staffy X American Bulldog and so is vigorous exercise. These dogs have masses of energy and need to run around and burn it off for at least an hour every day.

Keeping them mentally and physically exercised is one of the most important things when it comes to owning an American Bull Staffy. Otherwise, you’ll be dealing with chewing and destructive behaviour.

Having a Staffy X American Bulldog in a flat is generally okay because they’re only a medium-sized dog. However, they would be better suited to a family home with a garden they can burn all of that energy in.

In terms of being suitable for those with children, the Staffy American Bulldog is known to be protective, loyal, and devoted to their owners, so they can make great family dogs. Saying that, they’re a very strong and stocky breed, so always keep an eye on them around small children because they don’t always know their own strength.

So, if you’re looking for a strong, active and loyal dog, the Staffy American Bulldog could be the perfect Staffy crossbreed for you.