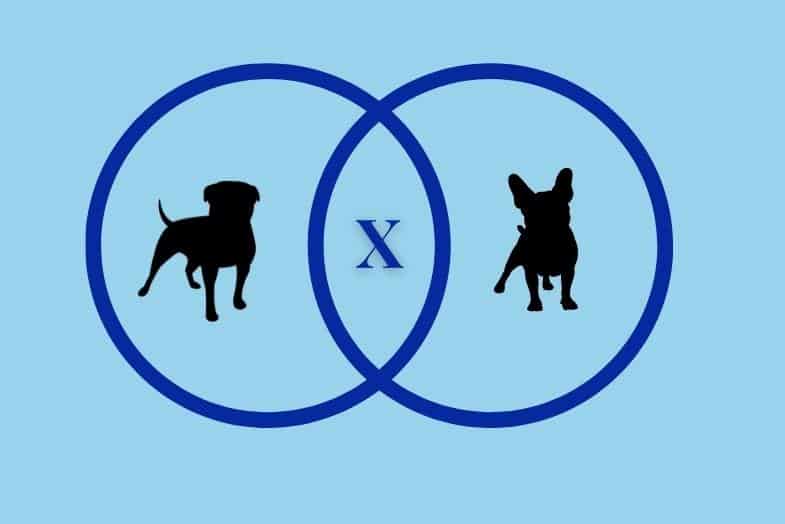 Frenchie Staffs are adorable and committed crossbreeds that make an amazing companion dog. They’re upbeat, happy, and get along easily with other animals, adults and children.

What Is a Staffy X French Bulldog?

A Staffy X French Bulldog is a mix of the Staffordshire Bull Terrier and French Bulldog. The French Bulldog originated in the UK and was bred by the craftsmen of the Lace Makers Guild; they were bred to be companion dogs.

During the industrial revolution, these lace makers fled to France, where their dogs were a huge hit; hence the new name, French Bulldog.

The French Bulldog loves to play and chill with its owners, and they’re renowned for being great companion dogs; that’s what they were bred for, after all.

As for Staffies, like the French Bulldog, they’re highly intelligent and originated in the UK. Even though the Staffordshire Bull Terrier was bred to fight, they’re a breed that, if trained properly, is just as loving and playful as the French Bulldog.

This mix is one of the happier, more devoted breeds out there.

What Is a Staffy French Bulldog Cross Called?

Both Staffies and French Bulldogs are sturdy dogs and together they create small to medium-sized dogs; their legs are short but their bodies are solid.

One of the most distinctive features of the Staffy French Bulldog is its bat-like ears that are usually almost or fully erect on the top of their head; it gives them a unique and appealing look.

In terms of grooming, the Staffy French is easy to maintain due to its short fur. Brushing once or twice a week will keep their coat glossy and looking healthy.

Talking of health, the French Bulldog cross Staffy has two main health issues every owner should be aware of; congenital heart disease and hip dysplasia.

If there are health issues with the French Bulldog parent, such as brachycephalic (flattened face and short muzzle), this can also create other genetic health problems.

If you’re looking for an intelligent and upbeat dog, the French Bulldog cross Staffy is perfect for you. They also make great family pets; their main aim is to please their owners. They’re also very obedient.

On the other hand, they hate to be ignored, so unless you’re prepared to give back all of the love that this crossbreed will show you, you could have an irritated dog on your hands.

Socialising this hybrid dog from a young age is also advised, as their aggressive side can come out if not properly trained. Even though they’re quite an easy-going breed, if provoked, their courageous side can shine and they will fight back.

However, the Frenchie Staff is a charming and committed breed to own that is great with humans of all ages, you just have to put in some socialising and behaviour training when they’re a pup.

When it comes to burning off energy, the Staffy cross French Bulldog is more on the low maintenance side, so if you’re not an overly active person, this crossbreed could be perfect for you.

Napping and lounging around at home are some of this hybrid’s favourite things to do. Also, expect minimal guarding and alerts to danger with this dog; they’ll most likely only pipe up when they want something.

So, if you’re looking for a fairly low maintenance dog that’s happy and lovable, the Frenchie Staff would be your perfect companion.