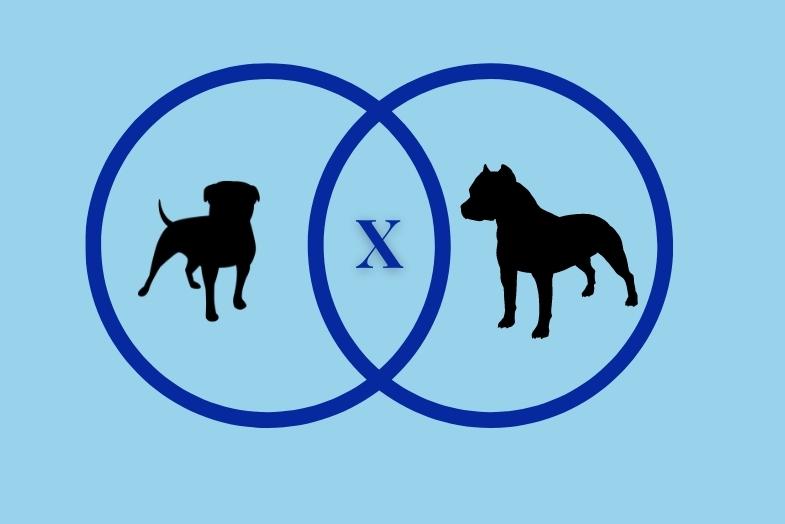 To appreciate and understand everything about the Staffy X Pitbull, you have to take a closer look at the two parent breeds. The Staffy Bull Pit is not a common hybrid or “designer dog breed”, as some prefer to call these crossbreeds.

The best approach to assessing mixed breeds’ temperament is to compare the breeds that make up the crossbreed. In addition, it’s not an exact science attempting to figure out the feature combinations you see in the hybrids.

In fact, breeders often do not breed their designer dogs from 100% purebred dogs. Breeders frequently breed multi-generational crosses. This practice can throw a further spanner in the works when trying to establish the looks and temperament of the resulting puppies.

What Is a Staffy X Pitbull?

First, I want to point out that the cross is not a purebred dog but is a mix between the American Pit Bull Terrier and the Staffordshire Bull Terrier.

American Pitbull Terriers are banned in the UK and have been since 1991; it’s illegal to breed, own, abandon or sell one of these dogs. Various states have also put the dog on their banned lists in the US.

The likelihood of finding a Staffy X Pitbull in the UK is extremely rare. If a breeder tries to sell you one, it’s more than probable that one half will be a Staffy, but the other parent will be unknown. While Pitbull crosses are not strictly banned, they may be subject to the law depending on their characteristics.

What Is a Staffy Pitbull Cross Called?

This hybrid designer dog goes by several names, including:

While the Staffy Bull Pit isn’t as large as some of the other breeds in the Staffy Bull Pit family, it’s still an extremely robust dog. Staffy Bull Pits have a substantial head, a broad flat skull, a wide, deep nose, and clean, straight lips. With the introduction of the American Pitbull’s more lenient criterion, they can come in any colour except blue.

In general, they have almond-shaped eyes in a darker brown colour. The ears of both breeds are naturally short and kept in either a rose or half prick form, and ear cropping is not encouraged.

This breed is known for having a well-developed shoulder and neck, and their legs should be straight with thick spherical bones.

One layer of short, stiff fur can appear in any colour; however, merle is discouraged due to the deafness and blindness accompanying this colouring.

American Staffordshire and American Pit Bull Terrier breeders have focused on creating athletic and powerful and loving, loyal, gentle dogs since the abolishment of dogfighting in the late 1800s.

Despite the breed’s eagerness to please their owners, their attention spans are not great. That means short, enjoyable and daily training sessions are needed. Try to make them as fun as possible.

Staffy Bull Pits must be closely supervised despite their well-trained temperaments whenever these dogs are around youngsters, especially toddlers. This safety precaution is because these dogs are often ignorant of their strength and can easily harm small children.

Well-bred dogs of this nature can be too friendly towards humans; they don’t know to be useful as guard dogs. But Staffy Bull Pits can be pretty protective of their human owners. They can be highly aggressive toward other dogs, requiring significant socialising.

Because some Staffordshire Bull Terriers and American Pit Bull Terriers may still have a fighting instinct, it is crucial to ensure you research the breeders exceptionally carefully and do your research before purchasing a puppy.

You can find breeders that sell Staffy X Pitbulls but be circumspect when choosing one and ensure you do your research. The law isn’t apparent when it comes to Pitbull crosses, and it’s best to keep the dog on a lead and possibly even muzzled.