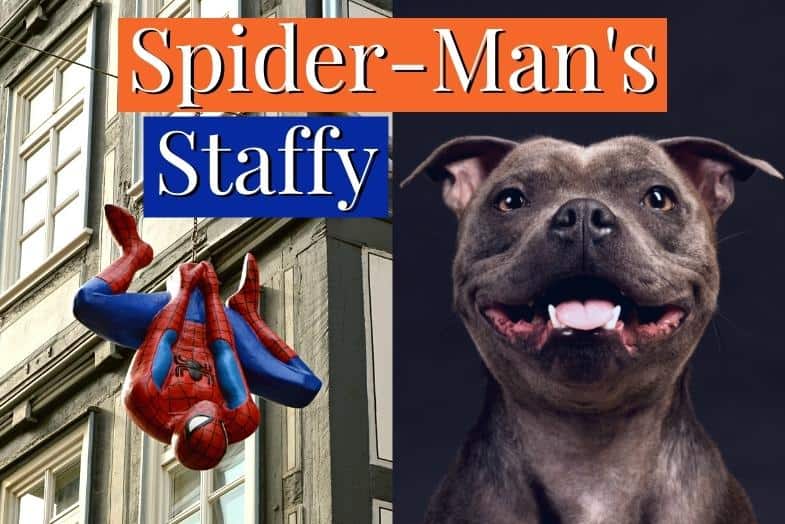 Tom Holland is most famously known for playing Spider-Man, but Holland isn’t only a superhero in the movies, he’s becoming the superhero of dogs, rehoming dogs, loving dogs and advocating for them, too.

He’s absolutely in love with dogs and he shouts it loudly for the entire world to hear.

So, let’s take a look at Tom Holland’s own dog, who he claims to be, the love of his life.

What Type of Dog Does Tom Holland Have?

I’m sure you can take a stab in the dark at what kind of dog Tom Holland has; you’re on a Staffy website, after all.

Tom Holland doesn’t only have a Staffordshire Bull Terrier, he has a gorgeous female Blue Staffy.

Does Tom Holland Have a Staffordshire Bull Terrier?

Yes! Tom has a Staffordshire Bull Terrier and that’s definitely one of our favourite things about him.

Not only does Tom have a Staffy, but he’s also being an incredible Staffy owner. He’s showing the world, on purpose, that Staffies are a loving breed and it’s all about how you raise them. The love between Holland and his Blue Staffy is undeniable – he even takes her to events with him!

Of course, Tom’s schedule can be a little crazy, but he even makes time to call his Staffy when he’s away.

Holland is helping show the world how amazing Staffies are and how to be an amazing dog owner, so we had to showcase him here.

Does Tom Holland Own a Pitbull?

Is a Staffordshire Bull Terrier a Pitbull? This mistake is made often, but no, a Staffy is not a Pitbull. They have many similar features and characteristics, but Tom Holland doesn’t own a Pitbull. His best friend is most definitely a Staffy.

That being said, Tom openly said that it’s nonsense that Pitbulls are considered “dangerous.”

Watch him get showered with kisses by these “dangerous” dogs in the video below.

What Is Tom Holland’s Dog Called?

Why Did Tom Holland Name His Dog Tessa?

Staffies have a bad rep. A lot of people think that they’re Pitbulls and that they’re dangerous. Nothing could be further from the truth. Staffies love people, children, and are always devoted companions. That’s what Tom Holland wanted the world to know, too.

Holland named his Blue Staffy Tessa because it’s a soft and gentle name, just like the Staffy breed. He wanted to show the world that the Staffordshire Bull Terrier doesn’t deserve the bad reputation that so many people uphold them to.

A big high-five to Tom for breaking the stigma!

When Did Tom Holland Get Tessa?

Tom Holland showcased his new Staffy to the world in July 2014 with this adorable picture on his Instagram page.

She was just a tiny puppy when he got her.

Is Tessa a Rescue Dog?

Tessa isn’t a rescue dog, but Tom is no stranger to dog rescuing and advocating for it. In 2019, Holland helped rehome puppies on The Late Show with Stephen Colbert in “Rescue Dog Rescue”. All of the puppies had superhero names too.

Not only that, Holland has been known to come across stray dogs and return them to their owners. He’s a complete softie when it comes to dogs and we absolutely love it.

Tom sums up what it’s like to have a Staffy, and most dogs, here:

“Walking the dog is great. It is very relaxing, but it brings you down to earth because a dog neither knows nor cares what your job is… In return, they give you absolute loyalty, a snuggle when they think you might need one and a lot of fun – and that has to be the very best friendship you can ever hope for.”

“A lot of people think that a Staffordshire Bull Terrier is ready for a fight at any time, but that is not true; they are only as their owners want them to be. When they are puppies, they are as cute as any other dog – it is how they are brought up. Tessa is a softie who wouldn’t hurt a fly.”

Okay, before you go, check out the video below where Tom Holland took Tessa the Staffy to a Spider-Man interview.

Tom Holland may be known as Spider-Man to a lot of people, but to us, he’s the superhero sharing an important message about the beloved Staffordshire Bull Terrier – with Tessa the Staffy by his side.