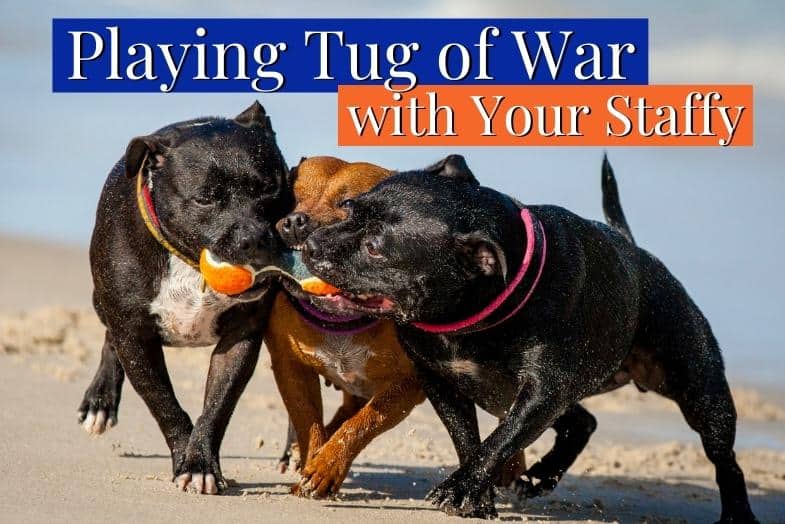 Other than being a fun way to burn off some extra energy, tug of war has a lot going for it, and most Staffies enjoy playing it.

When you are doing something that you and your Staffy enjoy, it will strengthen your relationship.

The game promotes solid interpersonal relationships and provides a wealth of reinforcement opportunities.

How Do You Entertain a Staffy?

Playing for the sake of playing is vital for a dog’s well-being, but you may also use play as a beneficial training tool.

Agility trainers know this very well, and they frequently carry a bag full of tug toys to keep their dogs fully interested; trainers might even use tug-leashes.

While Staffies are having fun, you have the opportunity to work on their obedience training. You might think this is a bit of a downer for the dog, but it enhances the experience in reality.

It’s astonishing how much more mentally stimulating it is to include a layer of challenge and supervision in your Staffy’s play. To top it off, it gives a Staffy a chance for more human interaction, something they can’t get enough of.

What Is Tug of War?

Two teams compete against each other, where each team pulls on the opposite end of a rope to bring the rope a certain distance in one direction, despite the rival team’s efforts to stop them. If you substitute one team with your Staffy and the other team with you or another dog, in a nutshell, that’s tug of war.

Is It Bad to Play Tug of War With Your Dog?

Most Staffies can play tug of war without any issues; however, there are some occasions when you should avoid the game.

Does Tug of War Cause Aggression in Dogs?

If your Staffy is already aggressive, playing tug of war can exacerbate those tendencies.

Before you begin, establish the rules of the game with your Staffy:

Why Does My Dog Shake His Head When Playing Tug of War?

Most specialists feel this is a behavioural instinct passed down from dogs’ ancestors, the wolves. In the wild, that’s how animals catch their prey. They’d take the creature in their mouth and shake it violently from side to side until it died.

Should I Let My Dog Win Tug of War?

When you let your dog “win” a game of tug, you’re not allowing them to dominate you. Instead, you’re cultivating a strong connection and demonstrating to your Staffy that playing games with you are a pleasurable experience.

We highly recommend these two tug of war toys for your Staffy: 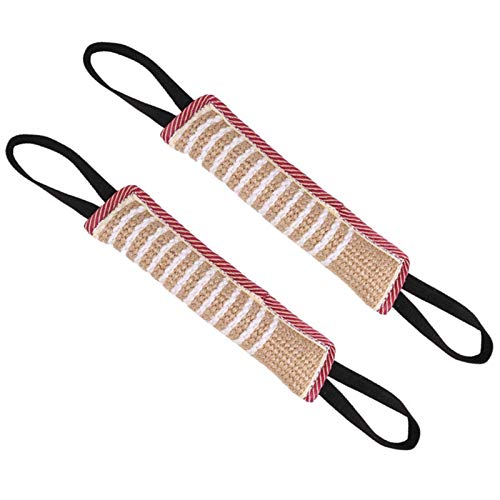 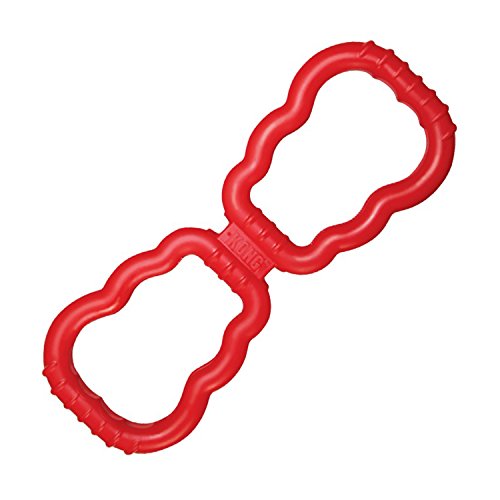 Staffies have a lot of muscle, so playing tug of war, chasing a ball, or fetching a heavy toy will give them plenty of exercise.

Staffies love to play with a whole range of toys, from toys that the dog needs to catch, such as frisbees, tug of war toys, and several chew toys.  However, you need to bear in mind that Staffies are powerful chewers, so choosing toys that don’t fall to pieces immediately they get their teeth into them is incredibly important. For more information on the best toys for Staffies, check out this article.