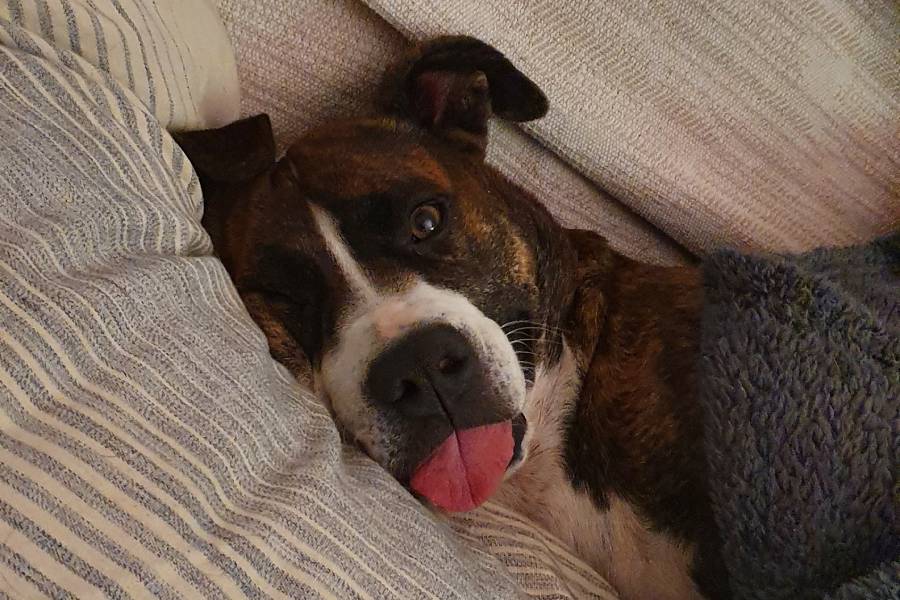 Staffordshire Bull Terriers, or Staffies as they are also known, make all manner of weird and wonderful noises. It can be amusing at times listening to all the distinct Staffy noises, although when a Staffy farts, trust me, that’s not pleasant. But have you ever wondered why Staffies snort, grunt and make funny noises?

In a word, yes, Staffies are incredibly vocal. Staffies have at their disposal myriad ways of telling you what they want; they don’t need to speak words to get their feelings across. Staffordshire Bull Terriers appear to use their whole body to communicate, head tilts, ears pricked, and tail and bottom wags convey a whole host of messages.

Staffies don’t rest there, though; they have an arsenal of barks, grunts, sniffles, and snorts that speak volumes.

Does your Staffy make a kind of honking, oinking, or semi-gagging sound? If so, it might be a reverse sneeze; I know, how do you reverse sneeze? It conjures up all kinds of weird facial contortions. But don’t worry, if you hear your Staffy making these sounds, he’s likely feeling some sort of irritation in his throat or the soft palate.

Your Staffy might have taken an extra-large breath through his nose, and that’s when the piggy sounds begin. Staffies might stretch out their necks, and you’ll see his chest expand and contract, and out will come noises that make him sound like he’s imitating a pig.

Sometimes it can be brought on by over-excitement, leash pulling, or an allergic reaction to something. If it continues for any length of time, check it out with your vet.

Why Does My Staffy Grunt?

You might notice your Staffy grunting from time to time, or perhaps it’s something he regularly does. Most dogs grunt, not just Staffies, and typically it’s a sign he’s relaxed and content.

Grunting can also be another type of communication; when you come home, and he’s been alone for a few hours, in his excitement at seeing you, he might let out a few grunts.

However, Staffies grunt for no obvious reason; they’re one of several breeds that well, just grunt. It might be from happiness; we’ve already mentioned excitement; Staffies grunt because they’re sad; they even grunt and groan when they fall asleep. Add in a few sniffles, snorts, and farts, and well, you get the whole picture.

Unlike humans, where we tend to snore even worse when we sleep on our backs, a Staffy seems to snore and grunt less when they sleep on their backs with their legs pointing to the sky.

Why Does My Staffy Make Funny Noises?

Staffordshire Bull Terriers have a shorter nose and throat structure than most dogs, and that can make them noisy breathers and, as some people describe it, sounding a little piggy-like. However, for whatever reason, some Staffies have a slightly longer nose than others and don’t appear to be as severely affected.

So why do Staffies snort, grunt and make funny noises? Well, with a Staffy, it’s not usually something that should be a concern. Most dogs grunt, some breeds more than others, and you can put Staffies in that group. Mostly it’s part and parcel of the way dogs communicate, especially Staffies.

A must-read whether you're thinking about getting a Staffordshire Bull Terrier for the first time or even if you're well experienced with them. An incredible resource.

link to Can Staffies Sleep Outside? [Where Staffies Should Sleep]

Can Staffies sleep outside? No, owners shouldn’t make them sleep outside the home. There are fundamental reasons for my answer, and I will explain why in this article. Staffies are robust and...

Continue Reading
link to Do Staffies Feel the Cold (+ Does a Staffy Need Coat in Winter)?

Plenty of dog breeds are fortunate because they have thick double coats, long outer coats, and dense shorter undercoats. These coats protect them from the hot sun and insulate them in freezing...