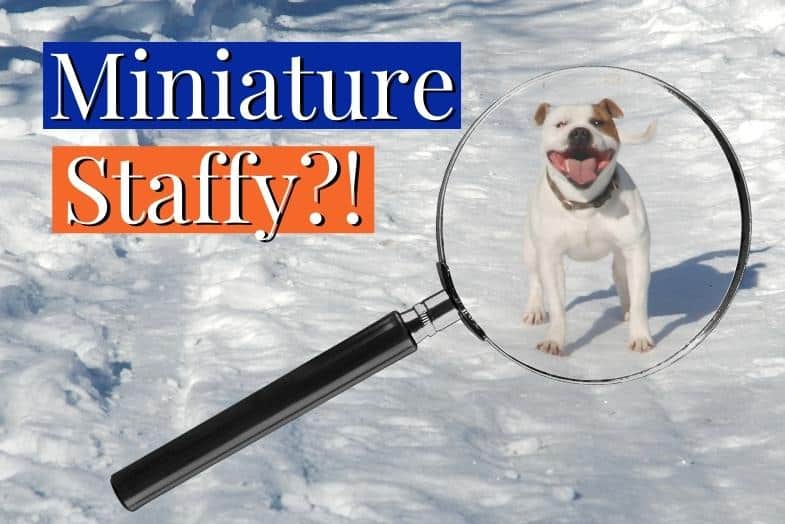 This article discusses the miniature Staffy and what’s the smallest Staffy breed. However, according to the UK Kennel Club, the Staffy breed standard sets the dog’s height at between 14 to 16 inches and 28 to 38lbs (females are typically 24 to 34lbs).

You measure a dog’s height from the ground to the withers (the area just above the dog’s shoulders). So, a Staffy at the bottom end of the height range – 14 inches, compared to a Staffy that’s 16 inches, then add in their neck and head, it’s easy to see why people might assume some Staffies are miniature. In fact, they are simply more petite than the average.

Do Staffies Come In Different Sizes?

Staffy breeding tends to lean towards two types of dog, the “bull” or “terrier” types. Terriers are a little leaner with slightly longer legs, whereas the bull type has shorter legs and looks boxier. However, they are not miniatures, and both of these dogs fall into the primary classification.

Can You Get Small Staffies?

It’s possible to get smaller than average dogs in any breed, and the Staffy is no exception. Typically though, they will be the runt of the litter or possibly sickly when born.

Since the typical number of puppies in a litter is around six, most litters will contain one smaller than average puppy, commonly referred to as the “runt.” This is not to say the puppy won’t catch up to its siblings; however, they might always stay noticeably smaller.

During the first week after birth, a puppy who doesn’t seem smaller or sicker than the rest of the litter can turn into a runt. If this puppy can’t compete with its siblings for warmth and milk, it’s not getting the necessary nourishment.

Is There a “Miniature” Staffy?

There are no officially recognised “Miniature” Staffordshire Bull Terriers. The problem could possibly be breeders crossbreeding Staffies and palming them off as “Minis”, “Short-legged Staffies”, or “Miniatures.”

I read about one particular story of a male Staffy mating with a female Jack Russel. The resulting puppies looked every bit like Staffies; I saw the pictures of the puppies, and you would think they were Staffies. However, the pups were very tiny.

The owner attempted to sell them as Mini Staffies until someone called out that they were crossbreeds and not pedigree Staffordshire Bull Terriers.

What Is the Smallest Staffy Breed?

Staffies aren’t miniature dogs. They are medium-sized dogs and heavy for their size. They still should fall into the general classification range of 14 to 16 inches. Staffies have the look of a small Pitbull in that they are robust, muscular and powerful dogs.

What Is a “Pocket Staffy”?

There is a term in use for a Staffy called the “Pocket Staffy”, and I have to say there’s no such thing. I’ve seen YouTube videos and dogs for sale or adoption where the seller uses the term Pocket Staffy. One YouTube video describes the dog as a little Pocket Staffy 35-40lbs. Clearly an average-sized Staffy.

Another one talks about a Staffy/Pitbull face, fully grown at 1-foot high, characteristics of a Jack Russell – one of the cutest Pocket Staffies – highly likely to be a cross between a Staffy and a Jack Russell.

There might be shorter-legged Staffies, but that’s probably the breeding. If they fall between 14 to 16 inches, they are within classification size.

There is a current trend with show Staffies for the dogs to have deeper chests. In dogs that only grow to 16 inches having a deeper barrel-like chest will naturally give the impression of a short-legged Staffy, even though the dog might only be ½ an inch shorter.