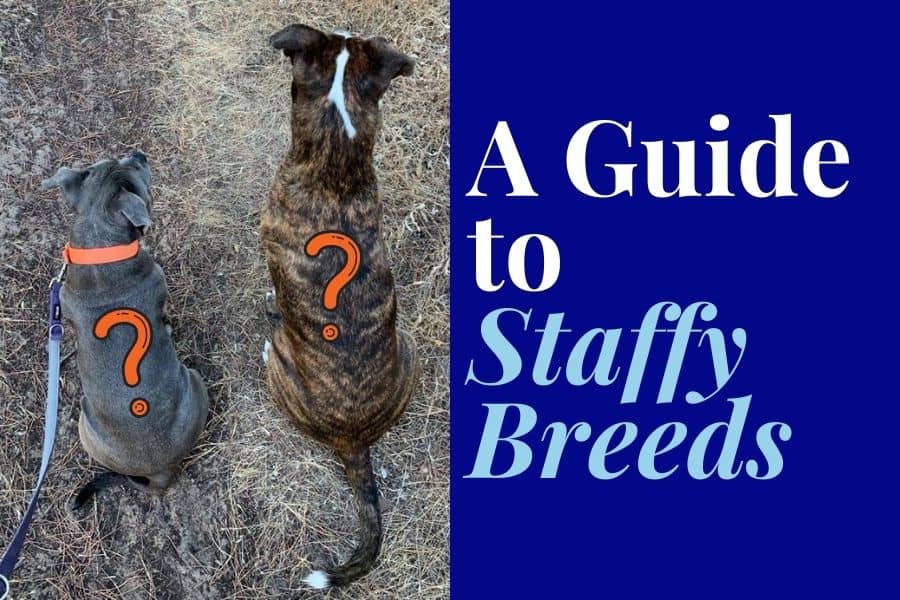 Just imagine if every imaginative Staffy name, thought up by some breeder or another, was actually a real type of Staffy. How many different types of Staffy would there be to discuss? You’re dead right; I think we could get into double figures.

What’s more, there are probably several more on top of those I’ve listed above.

What Are the Different Types of Staffies?

There is only one “type of Staffy,” and that is the Staffordshire Bull Terrier. Yes, I agree with you, the American Staffordshire Terrier is often affectionately called a Staffy, but their actual nickname is the AmStaff.

The first thing that strikes you when you see a Staffy is the low, squat body that gives them such a low powerful stance. You instantly get the impression; these dogs are going nowhere unless it’s by their choice.

Solid is an understatement when describing the Staffy; there’s a lot of weight and power packed into their medium-sized frame. Staffies are not very tall, barely reaching 19 inches, yet they can weigh up to 40 pounds.

Make no mistake about it; a Staffy can still be quick and agile, occasionally when they feel the need.

Staffies all have short, smooth coats with plenty of color variations. A Staffy’s ears are never cropped and always appear half-pricked or semi-folded.

Over many years in England, the Staffordshire Bull Terrier has earned a reputation as being particularly child-friendly, so much, so people nickname them the “nanny dog.”

Staffordshire’s never go looking for trouble; they would much prefer to avoid other dogs and make a wide berth around them. But true to the dog’s heritage, a Staffy will never walk away or back down if confronted.

Staffies can live in a home with other dogs, but it’s always better if the Staffy is a puppy joining established dogs and not the other way around.

Living With A Staffordshire Bull Terrier

Staffies are inside dogs craving time with their human family; a Staffy would be terribly lonely and miserable if kept outside the home. You will need to give a Staffy plenty of exercise to keep them fit and healthy and burn off excess energy.

The American Staffordshire Terrier, or AmStaff as it’s affectionately known, is a calm, gentle dog, accepting of children and most other family pets; however, the AmStaff probably draws the line with other dogs.

AmStaffs are athletic and energetic dogs; they might look intimidating to a casual observer; you soon discover their friendly and trusting nature once you get to know one.

American Staffordshire Terriers are inching towards being large dogs at 19 inches tall, and they are no lightweights, either, tipping the scales between 45 to 70 pounds. There’s also a lot of powerful muscle packed into the dog’s frame.

Breeders do crop the ears of AmStaff puppies, which, if anything, makes the dog look even more intimidating. Their coat is short and smooth; there are several coat colors, most of which are acceptable; however, any coat color comprising more than 80% white is not permitted.

Over many years professional breeders have needed to ensure the AmStaff has a favorable temperament with humans. The result of this careful breeding program is a reliable and even-tempered dog that is exceptionally trustworthy.

AmStaffs are big, powerful, and muscular dogs and should be carefully socialized from a very young age, even more so if you expect to bring them into a family environment.

The American Staffordshire Terrier is a playful dog, and as long as you make obedience training fun and enjoyable, they will participate wholeheartedly. The AmStaff isn’t a dog that will respond to harsh treatment; they love to be loved.

Living With An American Staffordshire Terrier

The AmStaff is first and foremost a family dog and wants to be close to a human family. The dog is energetic, and owners will need to provide sufficient amounts of daily exercise, both physical and mental.

AmStaffs are low-maintenance and require a brush once a week, plus the other typical grooming needs.

The Staffordshire Bull Terrier has a shared history and ancestry with the Old English Bulldog.

The Staffy was first bred in the 19th century in the Black Country of Staffordshire, England.

Once the government had outlawed bull and bear-baiting in England, dog owners turned to dogfighting to make a living. However, it was decided to cross the bulldog with terriers to produce a faster, more agile dog but retain the Bulldog’s aggression. The result was the bull and terrier crossbreeds.

During the mid-19th century, a Birmingham man called James Hinks determined to take the bull and terrier and transform the dog into a companion dog that retained the courage but without aggression; Hinks also wanted to refine the dog’s appearance.

Taking one particular type of bull and terrier, he crossed the dog with an English White Terrier.

Unfortunately, the dog’s fearsome reputation as a fighting dog made it incredibly difficult for the breed to gain recognition to the Kennel Club.

In 1930 advertisements used the name “Staffordshire Bull Terrier” to promote sales of the dog, and during the following three years, a breeder, Joseph Dunn, lobbied for the dog to be allowed into the Kennel Club. Eventually, in 1935 the Kennel Club recognised the dog as the “Staffordshire Bull Terrier.” A breed standard was also approved that same year.

Over in the United States, the AKC (American Kennel Club) point-blank refused to recognise any of the English Bull and Terrier crosses that came to the US in the late 1800s. However, in 1936 the AKC did eventually recognise the Staffordshire Terrier.

To avoid confusion between the two dogs, in 1972, the AKC changed the name of the American dog to American Staffordshire Terrier. The AKC later recognised the English Staffordshire Bull Terrier in 1974.

All of us, even our Staffies, get old eventually. It is all too easy to notice the warning signs during our everyday routines. When it comes to your Staffy's health, early detection of indications of...

The American Staffordshire Terrier is one of the most misunderstood breeds with a shaky reputation due to breed stereotypes. The authorities have banned the Amstaff in numerous cities throughout the...