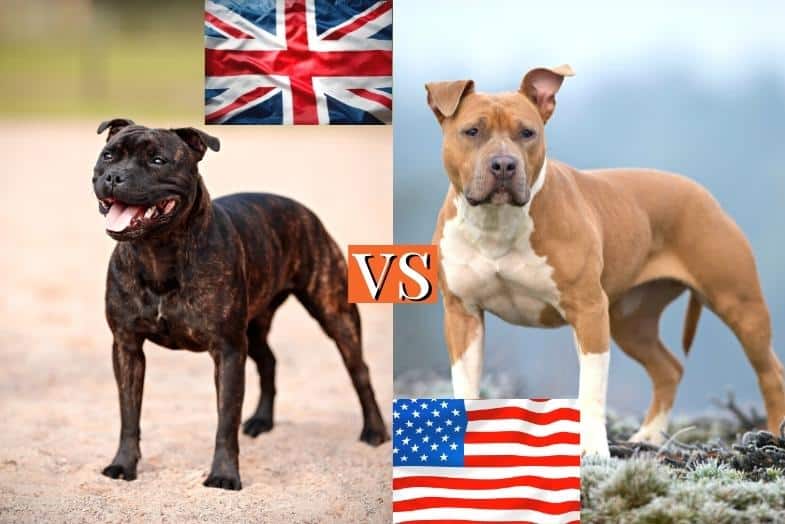 The English Staffy and the American Staffy are often mistaken for each other. However, there are several differences between these two dogs despite their similar appearances.

English Staffy vs American Staffy – At a Glance

What Is an “English Staffy”?

The Staffordshire Bull Terrier is the official name of the English Staffy (and yes, they are Terriers). According to the Staffy’s history, they descended from the old English ‘Bull and Terrier’ long-extinct breed. Back in the 1800s, bullfighting and bear-baiting were common pastimes for ‘Bull and Terriers,’ their owners breeding them for their aggressive dogfighting abilities.

Staffordshire coal miners fought their dogs for entertainment while not at work. The dogs they bred and trained for this terrible sport were called the Staffordshire Bull Terrier.

Even though aggressive in the dogfighting ring, the Staffy owners bred the dog to be kind and gentle to its human family. These dogs often lived in the same accommodation, too.

So, the modern Staffy is an affectionate, friendly dog who likes spending time with its family. An aggressive Staffy is not an accurate representation of the breed but rather the result of an irresponsible owner.

Staffordshire Bull Terrier owners took their dogs to the United States to work their farms when they emigrated in the late 1800s.  The Staffy became the basis for the American Staffordshire Terrier, a taller, more muscular cousin.

What Is an “American Staffy”?

However, because the Americans had created a larger dog than the Staffordshire Bull Terrier, the AKC (American Kennel Club) changed the name to the American Staffordshire Terrier in 1976. This was to properly separate the two breeds and avoid further confusion.

Similarities Between the Amstaff and Staffy

Differences Between the Amstaff and Staffy

There is little to choose between the Amstaff and Staffy in temperament. Both are devoted to family, intelligent and courageous dogs. The Staffy is perhaps a tad more affectionate and fearless than the Amstaff, but they are more tenacious dogs. Amstaffs enjoy playtime a little more than the Staffy, especially when they are still young.

By quite a large amount, the Amstaff is a bigger dog than the Staffy. The size difference is the first thing you will notice if they were to stand side by side.

Amstaffs are the heavier dog with an average weight of 27.5 kg, the Staffy averages around 14 kg.