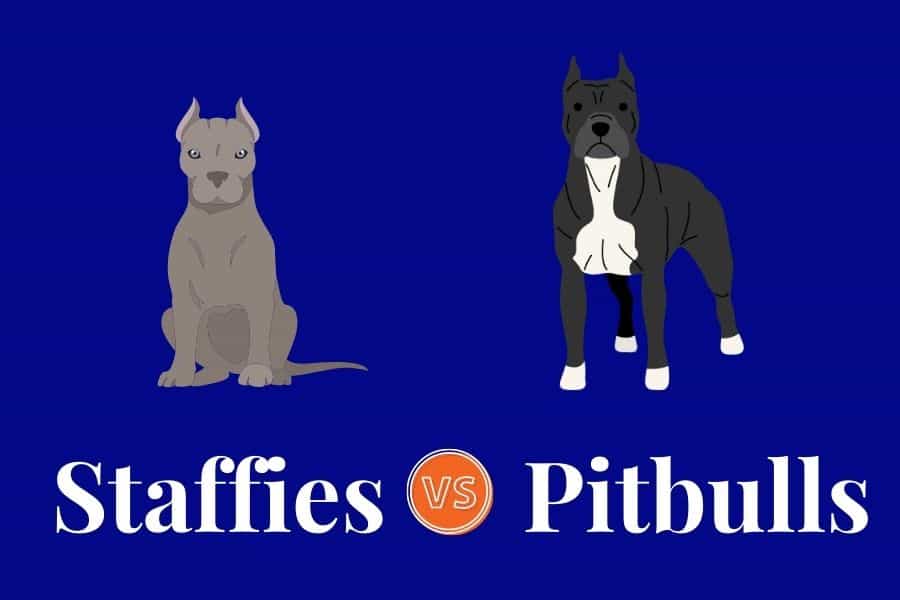 Have you ever found yourself wondering is a Staffy a Pitbull? Unsurprisingly most people get pretty confused when it comes to separating Staffies from Pitbulls.

First of all, we should clear up the confusion surrounding the term Pitbull. While it’s perfectly accurate for most people to associate the American Pitbull Terrier with the term Pitbull, there are several dogs lumped together as “bully breeds.”

To make matters worse, the term “bully breed” conjures up images of aggressive and ferocious dogs, at least in some people’s minds.

The simple truth is that many of the breeds we call Bullies have different personalities, appearances, and vastly different histories.

However, all of these dog types descend from the Molosser dogs originating in ancient Greece and taken all over what is now the European continent, where they, of course, bred with local dogs.

What is a Staffy Dog?

The Staffy (Staffie) is a nickname given to the Staffordshire Bull Terrier and other Staffordshire dog breeds (inc. American Staffordshire Terriers), a medium-sized smooth-coated dog. For their size, they are tremendously powerful dogs; at the same time, the dog possesses equal amounts of intelligence, courage, and affection for their family, especially children.

Nevertheless, a Staffy might be mild-mannered and adorable; they will still require an experienced owner who can deal with powerful and robust dogs.

Staffy – At A Glance

The Staffordshire Bull Terrier isn’t to be confused with the American Staffordshire Terrier. Although typically nicknamed the Am Staff, they are entirely different breeds; sometimes, people shorten the name further to Staffy, hence where the confusion might arise.

The Staffordshire Bull Terrier is the quientessential “Staffy” dog, but there are several other breeds that are referred to as “Staffies”, such as the American Staffordshire Terrier (Amstaff), the Australian Staffy, the English Staffy and more.

On total, there are around 12 types of Staffy:

The simple truth is, none of these “types of Staffy” are genuine breeds. Believe it or not, breeders make these names up to imply they are selling a rare variety of Staffy. Why do I say this? You’ve got it! They want to sell more puppies and, to top it off, charge a premium price.

Is a Staffy a Staffordshire Bull Terrier?

First of all, that’s precisely what I’m saying. Suppose you’re looking to add a Staffy to your family. In that case, you should research the breeders extra carefully, and I would suggest only approaching breeders who have been personally recommended to you by a reputable source.

Should you take a breeder at face value, you’ll be fortunate not to get stung.

You’ll probably end up paying a lot of money for what amounts to a crossbreed that will be worth a fraction of what you paid.

Is a Staffy the Same as a Pitbull?

Pit Bulls are not the same dog as the Staffordshire Bull Terrier; however, they share a similar bloodline and history, which is where the confusion occurs.

Almost two hundred years later, breeders in England began experimenting with Bulldogs and Terriers to create an agile and powerful fighting dog to initially take part in bull and bear-baiting. Once that was banned in dogfighting.

English immigrants took this dog to America, and the dog became known as the American Pit Bull Terrier. Later on, the dog branched into the American Staffordshire Terrier.

So in the respect, both the Staffordshire Bull Terrier and the Pitbull had the Old English Bulldog in their heritage you can say they shared a similar bloodline. However, they are not the same dog breed.

What’s the Difference Between Pitbulls and Staffies?

Sadly, some misinformed people might label Staffies as Pitbulls, but the reality is they are not Pitbulls. Pitbulls are banned in the UK since 1991; however, the Staffordshire Bull Terrier is registered and recognized by the Kennel Club.

Both dogs may have a shared heritage, and owners used them in the cruel sport of bull and bear-baiting; however, that doesn’t make a Staffy a Pitbull.

Pitbulls and Staffordshire Bull Terriers are very similar in that they both need very dedicated socialization and training. Neither dog is a good choice for inexperienced or timid owners.

Frankly, if you are thinking about owning a Staffie and you’re an inexperienced dog owner, it would be advisable to take your Staffy puppy to obedience classes or hire a professional trainer. Let’s face it, ensuring a Staffy is obedient is absolutely essential.