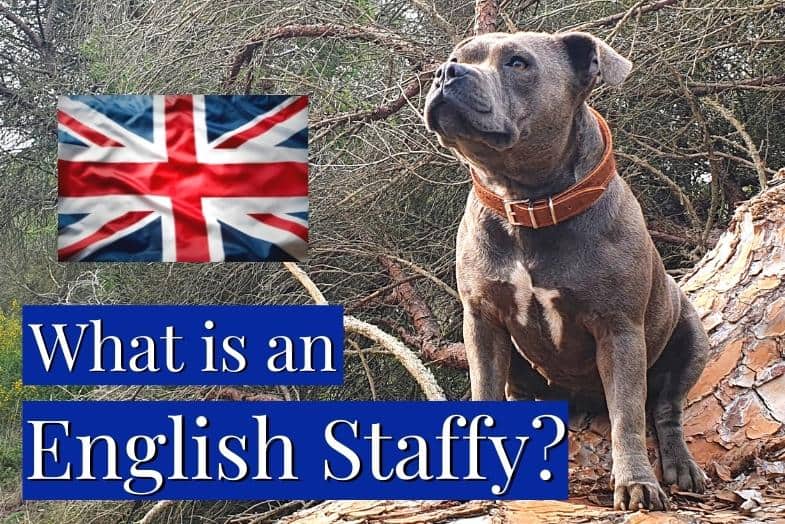 The English Staffy, or the dog’s correct name, the Staffordshire Bull Terrier, is one of the most popular and iconic dogs in the UK. But did you know it also ranks as one of Australia’s most popular dog breeds?

But, frankly, there is no “English Staffy.” There is only the Staffordshire Bull Terrier breed, and sometimes their name is shortened to Staffy, Stafford, or SBT.

In the early 19th century, dog breeders in England created the Staffordshire Bull Terrier by breeding the Old English Bulldog with a Terrier, probably the Manchester Terrier. However, some history points to the involvement of several terriers. Because the origins of this dog trace back to Staffordshire in the Midlands of England, the Staffy is 100% an English dog.

Therefore, it doesn’t need to be described as the “English Staffy.”

First, breeders didn’t call the dog the Staffordshire Bull Terrier; the dog went through several different names such as Bulldog Terriers, Old Pit Bull Terriers, and Bull and Terrier Dogs. Then, the Staffy was taken across to the United States by owners emigrating there. This gave rise to an American version of the dog called the American Staffordshire Terrier.

There are no different types of English Staffy or any other Staffy. Yes, you can pick up a newspaper or go online and see this “type” or that “type” of Staffy for sale. I’ve seen them called miniature Staffies, Old-Type Staffordshire Bull Terriers, Scottish Staffy, King Staffords, and we could list even more.

Is a Staffordshire Bull Terrier an “English Staffy”?

The Staffordshire Bull Terrier is the “Staffy,” neither English nor any other nationality. However, I have heard the Australians call the dog the English Staffy, probably because they originally came from England many years ago.

There are plenty of dogs that breeders will cross with the Staffordshire Bull Terrier yet still try to pass them off as purebred dogs. Of course, these dogs will not come with a legitimate pedigree, but they come with fancy made-up names that attract unsuspecting buyers.

I mentioned that the Staffordshire Bull Terrier was previously taken to America when its owners emigrated. The Americans wanted a larger version of the dog, so the two lines split.

Today, the Amstaff is quite a bit larger than the Staffy. Typically, you can expect an Amstaff to be around five inches taller. They’ll also weigh at least twenty pounds more than a Staffy.

You would instantly be able to tell the Staffy and Amstaff apart. But you would struggle to know the difference between the Pitbull and the Amstaff. Both Amstaff and Staffy have similar temperaments; they are happy, extroverted, exuberant, muscular, friendly, and excellent with children. Although, the Staffy is probably more trustworthy around kids.