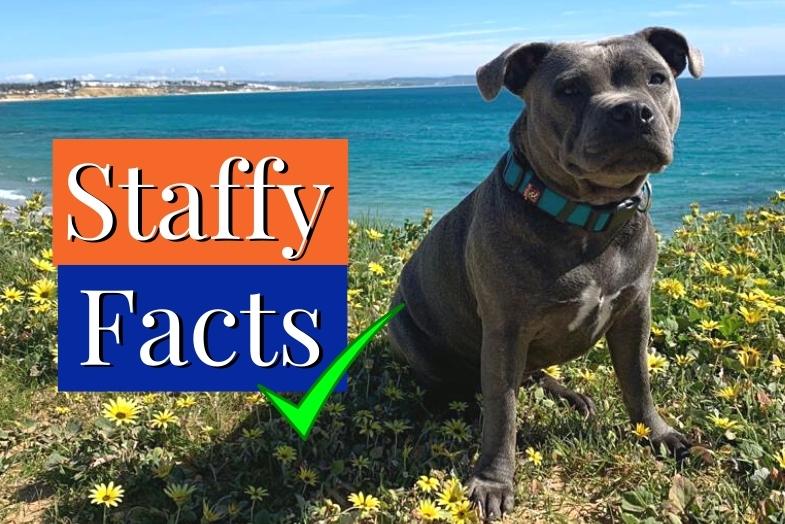 You’re here for Staffordshire Bull Terrier facts, so here’s one for free: Staffies are one of the UK’s favourite dog breeds. You regularly see them in the top two or three of many popular dog lists.

Despite the Staffordshire Bull Terrier’s reputation as a gentle and docile breed, these dogs seldom back down if they come across an aggressive dog.

People often confuse the Staffy for other dog breeds because of their appearance and what others say or read online. Misconceptions such as these are typical regarding the Staffy. They can lead to many false assumptions about their temperament and personality.

So, to redress the balance in some small way, here are some Staffordshire Bull Terrier facts: five things you might not know about Staffies.

1. Staffies Have a Long but Tarnished History

Staffordshire Bull Terrier fact number one is that dog historians are pretty sure that dog breeders initially bred the Stafford from the Old English Bulldog and local Terriers. This breeding was for the notorious dogfighting rings prevalent in early 19th century England.

While these dogs were incredibly aggressive towards other dogs, they were not allowed to harm humans. Most dogs lived with their human families, including many children, in one-roomed homes.

Therefore, owners would put down any dogs showing aggression towards humans. Dog handlers often had to get into the dogfighting pit to separate dogs. It goes to the respect these dogs had for humans that handlers could get between two dogs viciously trying to rip each other apart without harm.

The Staffy was known by several names such as the Patched Fighting Terrier, Staffordshire Pit-dog, Brindle Bull, and Bull-and-Terrier. However, the most common name was Bull Terrier or Hinks’ Bull Terrier.

Dog historians have credited James Hinks with creating the modern Bull Terrier. It’s not known precisely the dogs used but perhaps a mix of English Bulldog, English White Terrier, Dalmatian and even a Greyhound. Hinks’ new breed was also known as the White Cavalier.

Some fans of the original bull and terrier crosses didn’t like the breeds, such as the Dalmatian and Collie. So from this point, their history diverged into two breeds – The Bull Terrier and the Staffordshire Bull Terrier.

An alarming statistic is that nearly three-quarters of people say they would be reluctant to adopt a Staffordshire Bull Terrier because of their unjustified stigma. Some shelters have even resorted to photographing their Staffies behind cutouts of other more popular dogs. This tactic is in the hope that potential owners will focus on the dog’s personality and not what they look like.

However, Shelters have reported taking in hundreds of Staffies each year, with many more being turned away because of lack of space.

4. Staffies Can Be Low and High Maintenance Dogs

Staffies are high maintenance because they require lots of mental and physical exercise. They are the epitome of the Energizer Bunny of the dog world. Staffies are continually on the go, and regular exercise is paramount in maintaining a Staffy’s health. Hiking, long walks, and plenty of games will keep your Staffy entertained.

On the other hand, training a Staffy is low maintenance because they are eager to please and reasonably intelligent dogs. They are not a Collie by any means, but they pick things up fairly quickly. But their desire to please their humans makes them such easy dogs to train. Having said that, they can be stubborn, so you need a degree or two of patience. However, as with training any dog, consistency is key to reinforcing what they learn daily, or they will slip into bad habits.

Staffies are definitely low maintenance when it comes to bathing and grooming. A bath every two or three months (unless they roll in something unpleasant) is plenty. Plus, a weekly brushing and regular nail clipping are all a Staffy needs.

5. Staffies Are Not a Banned Dog

People for the Ethical Treatment of Animals (PETA) pushed for the Staffordshire Bull Terrier to be added to the list of prohibited dog breeds in 2018, which was unsuccessful. After strong opposition from animal welfare groups like the RSPCA, the Kennel Club/Dogs Trust/Blue Cross/Battersea Dog and Cat Home, and several other reputable organisations, the project was swiftly discarded.

Staffies are considered one of the “Bully Breeds” or types of dog, and one of those breeds, the American Pit Bull Terrier, is banned in the UK.