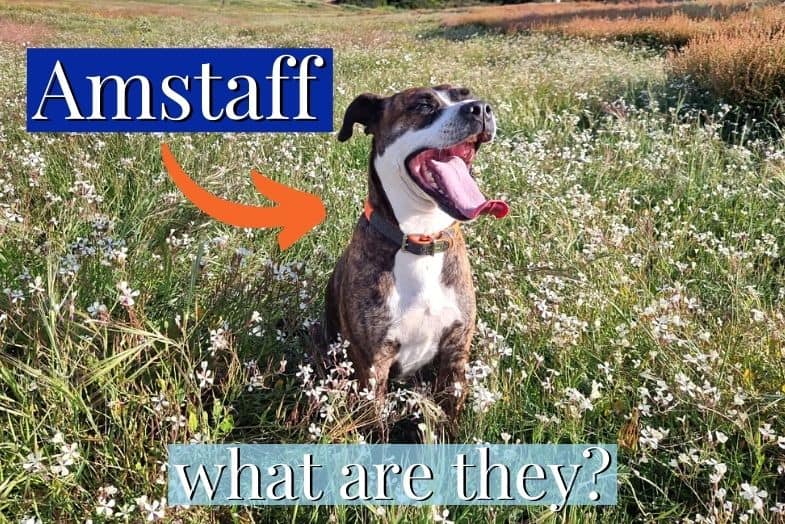 The American Staffordshire Terrier is one of the most misunderstood breeds with a shaky reputation due to breed stereotypes. The authorities have banned the Amstaff in numerous cities throughout the United States.

While not illegal here in the UK, the American Staffordshire Terrier is still a Pit Bull type that is illegal. Regardless of its reputation as aggressive, this dog is, in fact, a very docile and loving companion.

Nevertheless, the Amstaff continues to be a popular breed in the United States, despite the existence of breed-specific restrictions. Those who care for and cherish these dogs will discover their true nature as devoted family members.

What Is an Amstaff Dog?

The American Staffordshire Terrier is a true athlete with vast amounts of strength. Even though it has plenty of muscle mass, the dog is speedy and supple in its movement.

However, despite the menacing appearance of the large head and powerful jaws, these dogs generally have a joyful nature. They also have short but not docked, happily wagging tails.

Breeders often crop the Amstaff’s ears but leaving them as they are at birth is preferable. This dog weighs between 45 to 70 pounds (20 to 32 kilograms). They have a lot of bulk. It’s approximately 17 and 19 inches tall. Their coat is short and slick. Coats over 80 percent black and tan or liver in colour are not ideal but can be acceptable.

The Amstaff requires rigorous daily workouts and plenty of mental stimulation to perform at its peak. An American Staffordshire terrier is a fantastic companion for a lengthy walk or a fast-paced game of fetch. You cannot overstate the cognitive benefits of intense obedience training for this breed.

A short-haired coat means this is not a dog to leave living outside because weather extremes will affect the dog’s health. Besides, the Amstaff prefers to be part of the family’s everyday activities. They are low-maintenance dogs with just a weekly brush necessary for coat maintenance.

What Breeds Make an Amstaff?

There are two main lines of descent for the American Staffordshire Terrier. Crosses between the Old English Bulldog and various English terrier breeds of the period, such as the fox terrier. English Bulldogs were the direct descendants of the great mastiff dogs brought over to England by the Romans.

The old English Bulldogs were far from the Bulldog we see today. In those days, a favourite pastime was bull-baiting, ostensibly to tenderise the meat before the butchers slaughtered the bulls. However, it quickly turned into a gruesome exhibition for many onlookers.

During this period, breeders in England were primarily concerned with the sporting capabilities of the dogs. Strength, stamina, endurance, and intellect are attributes these crosses had in plenty.

Apart from that, they showed fierce devotion to their master, which was critical. The breeders turned to dogfighting once the government outlawed bull baiting in England. The Amstaff was the perfect candidate.

Is Amstaff the Same as Pitbull?

American Staffordshire Terriers and Pit Bull Terriers are similar dogs. Both have been employed in illicit dog fighting rings, making them targets of breed-specific legislation.

Despite being bred separately for more than 50 years, American Staffordshire Terriers and American Pit Bull Terriers have many similarities. As a result, these dogs are known as ‘Pitbull types.’ Although the American Kennel Club recognises the Amstaff, many insurance companies will not provide homeowner insurance to homes that have an Amstaff.

Often, visitors are surprised to hear that this muscular, confident dog is so laid back. Good-natured and devoted, the American Staffordshire Terrier is a wonderful best friend to everyone who owns one. The Amstaff needs a modest amount of daily exercise to keep up their athleticism and finely-tuned reflexes.

Companionship and constant socialisation are considerably more crucial. Some Amstaffs are very exuberant when meeting new people. Others are friendly but reserved.

American Staffordshires respond well to confident owners who have experience with large, powerful dogs despite their stubbornness. Owners who appreciate how to create an environment where the dog thrives yet is well trained and behaved.

Whether or not they are good around other animals is up for debate. AmStaff’s dogfighting heritage is so long ago that modern breeding lines don’t produce the aggressive dogs they once were. So they can coexist peacefully with plenty of furry family members.

However, if another assertive dog approaches an Amstaff, most AmStaffs would happily reciprocate.

What Is the Difference Between Amstaff and English Staffy?

There is sometimes confusion between the Amstaff and Staffy because the Amstaff is often called a Staffy. But when you stand them side by side, they are different.

The Amstaff is the taller and heavier of the two dogs, with a height of between 17 to 19 inches at the shoulder. This makes them a good two to three inches taller than the Staffordshire Bull Terrier. Amstaffs can reach a total size weight of 70lbs which is twice the weight of the average Staffy.

Both are family-oriented dogs and love being part of a close-knit family environment. The Staffy has a slight edge here because of the dog’s fantastic reputation around children.

Are Amstaffs Banned in the UK?

Amstaffs are not on the UK’s illegal dog list, so the Amstaff is not banned in the UK. However, the American Pit Bull Terrier is on the banned list. So in English law, the onus is on the owner to prove the dog is not a ‘Pitbull’ type. Because the Amstaff closely resembles an APBT, that can take some convincing.

link to Are Staffies Good Guard Dogs? [NO! Here's Why]

Staffies are excellent watchdogs providing you have socialised them from a very young puppy. Once Staffies are a little older, they are very sensible dogs and will protect you and your family, but do...

Continue Reading
link to Staffordshire Bull Terrier Adoption: How to Adopt a Staffy