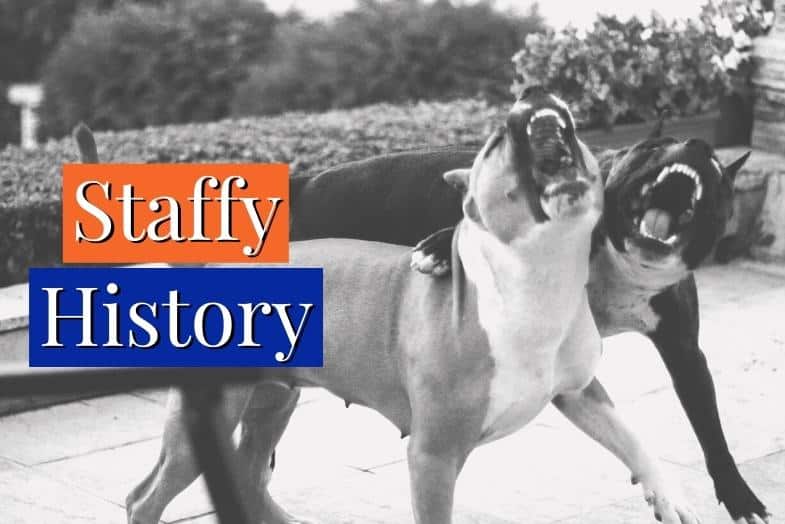 Staffordshire Bull Terrier owners love their dogs because of their size, short, easy maintenance coats, and active yet gentle dispositions. Although the coat only requires a quick brush, they tend to shed all year. Despite current restrictions on owning a Staffy, they remain widely sought after in the UK.

Where Do Staffordshire Bull Terriers Originate From?

Stafford Bull Terriers originated in the Black Country of Staffordshire in the English Midlands. The credit goes to James Hinks from Birmingham for being the creator of the Bull Terrier in the mid-1800s.

What Breeds Make up a Staffordshire Bull Terrier?

The Staffy has its breed origins from hundreds of years ago with the old mastiff dogs developed into the Old English Bulldog. Once the English government passed the Cruelty to Animals Act in 1835, breeders began developing dogs by crossing bulldogs with the smaller terrier breeds. They believed the new terrier blood would create dogs with more agility and “gameness.”

There aren’t any accurate records of which terriers breeders used. However, it’s believed the Manchester Terrier, the now extinct English White Terrier, and several old working terriers were in the mix.

There were other crosses in those days, but no one thought to award the dogs a proper name; breeders simply referred to them as half-and-half, half-breds, or the bull and terrier.

In England, bull-baiting, bear-baiting, dog fighting, and many other animal sports were popular bloodsports before the twentieth century. In many cases, people engaged in these terrible sports because they were otherwise unable to provide for their families. Owning a fighting dog or betting on the outcomes was a means to augment their income.

However, it wasn’t only a sport for the poor of the day. In those days, it was common for bulls brought to market to be set on by packs of dogs, so the dogs tenderised the meat before being sold. It wasn’t the done thing to sell meat unless the dogs treated it this way.

These barbaric practices were a popular form of entertainment for locals and the wealthy alike, which helped unite the classes in their choice of amusement.

In England in the 16th and 17th centuries, entertaining the rich, poor, and everyone in between, bear-baiting, bull-baiting, dog fights, and even combat between chimps were the order of the day.

By a long way, bear-baiting was the most popular form of entertainment. In this horrific test, the bear handlers would fasten the bear to a stake by its leg or neck. A pack of dogs—usually bulldogs or mastiffs—would be unleashed into the arena as spectators applauded and made bets on the bear’s demise.

Even though these were giant dogs, weighing upwards of 120lbs, several would die in the encounters. However, it wasn’t the intention to kill the bear in one fight. The expense involved in bringing them to England was too high. So with their injuries patched, they would be ready for their next bouts. Some of these bears survived long enough to gain celebrity status.

Two streets in London have kept their original names from those times, Bear Gardens and Bear Lane.

After 1835, dogfighting took over after the banning of these blood sports. It was much easier to organise, and only a small pit was necessary. Dogs would fight to the death in these contests. A champion fighting dog brought a good deal of wealth and prestige to the dog’s owners.

Owners taught their pit dogs to be as trustworthy with people as they were hostile toward other dogs because owners and judges frequently handled them in the pit during fights.

Unlike bear-baiting, which required giant heavy dogs, a smaller, faster dog was necessary for the pit. So breeders introduced terriers into the mix to gain a combination of speed and tenacity the old bulldogs didn’t possess.

James Hinks, who we mentioned previously, developed a new breed. It was a cross between a Bulldog and a Black and Tan Terrier, which became the Bull Terrier. However, other breeders preferred to work with the more aggressive bulldog-terrier mixes. So, between the two sets of breeders, they developed two types of Bull Terrier. James Hinks’ white cavalier Bull Terrier and the other breeder’s Staffordshire Bull Terrier.

During the early 1930s, a dog breeder, Joe Dunn, devoted his time to getting the Staffordshire Bull Terrier recognised as a purebred dog by the UK Kennel Club. In April 1935, he arranged a variety dog show with cash prizes for those who turned up with their Staffords. This was to establish enough interest and convince the KC to take notice of the dog. The show was a huge success.

The Staffordshire Bull Terrier Club was formed in April 1935. The Kennel Club accepted the dog in July later the same year. The AKC (American Kennel Club) recognised the Staffy in 1974 as the 121st breed registered.

What Were Staffordshire Bull Terriers Bred For?

As you can see from the Staffordshire Bull Terrier history, they were bred first and foremost as a fighting dog. Their ancestors were the original fighting bulldogs. Even the terriers that the breeders used to cross with the bulldog were also fighting dogs.

Even then, owners bred their dogs to be kind and affectionate to humans. To separate two dogs in the heat of battle without getting bitten says a lot about the dog’s temperament and their affinity to humans.