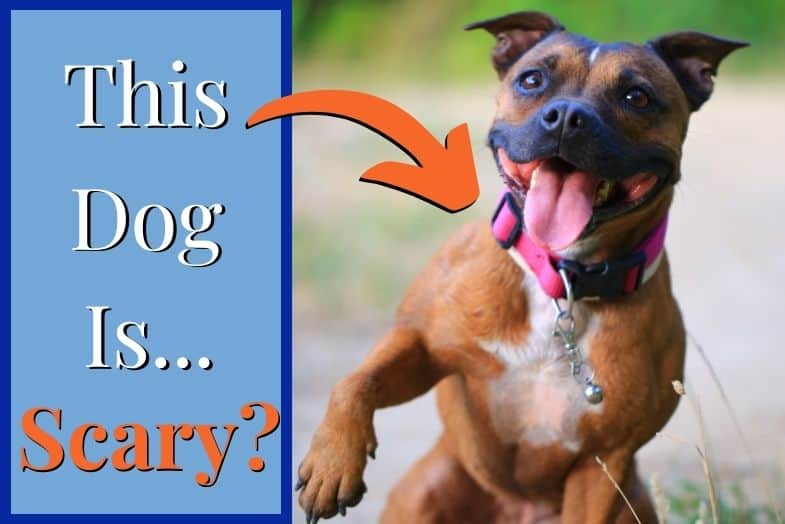 Many people have the wrong idea about Staffordshire Bull Terriers. Sadly, Staffies have an undeserved reputation for being a violent breed.

Anyone reading about the early beginnings of the breed, as first bull and bear baiting and then dogfighting, it’s far too easy for people to jump to conclusions.

Over the years, one breed after another has garnered a reputation for being aggressive. Various news outlets have consistently warned potential dog buyers to avoid buying them. If it wasn’t the Doberman or the German Shepherd, it was the Rottweiler.

It seems almost inevitable that the Staffy would also take the brunt of bad press regarding violent and aggressive dogs.

Why Do Staffies Have Such a Bad Reputation?

Staffies were associated with harrowing headlines about dangerous dogs, dogfights, and the gangland lifestyle. The “chav” culture adopted the Staffy as their dog of choice because of this unfair perception of Staffies as fighting dogs. The Staffy is stocky, robust and muscular. Undoubtedly, it looks the part.

However, it doesn’t work out too well when your “macho” image is blown because your frightening dog prefers to say hello to people. Staffies will lick you to death rather than bite you.

The “chavs” discovered their tough and aggressive dog wasn’t what they thought and abandoned them. This is one theory, put forward by the Scottish SPCA, for the numbers of Staffies in rescue centres.

The media also need to take part of the blame for the aggressive dog accusations levelled at the Staffy. When reporting on a “dangerous dog,” the press would often use a photo of a Staffordshire Bull Terrier, whether the dog in question was a Staffy or not. Naturally, this meant people would associate the Staffy with being aggressive and helped cement the image of the Staffy as having a bad reputation.

As previously mentioned, the original Staffordshire Bull Terrier possessed aggressive characteristics. This no longer applies to the modern Staffy. Breeders have been creating a more balanced and docile companion dog for a long time.

The breed is renowned for its compatibility with families and dedication to children. It is a trustworthy guardian and companion when properly trained and thoroughly socialised.

The sad truth is that any dog can be encouraged to be dangerous and aggressive. This includes seemingly happy-go-lucky breeds like Staffordshire Bull Terriers. Ill-treatment will do that to any dog breed, even the tiniest dog such as a Yorkshire Terrier.  Yet, with the correct owners and environment, they make beloved pets.

Why Do People Think Staffies Are Aggressive?

Sadly it’s more of a perception than reality. Have Staffordshire Bull Terriers bitten people? Yes, undoubtedly. In addition, there’s the myth that Staffies have a jaw that locks, which makes them even more dangerous.

However, more people are bitten by other dog breeds, even tiny cuddly dogs that you wouldn’t expect to bite.

In the UK, we have a dangerous dogs list, yet the Staffy isn’t on there. Why is that? There are so many dog breeds ahead of the Staffy regarding dog bites. Cocker Spaniels, Retrievers, and even Poodles, to list a few, are far more likely to bite than the Staffy.

We should also remember the human influence in whether a dog becomes aggressive. Mistreatment and abuse from a dog’s owner will often turn even the most docile dog into one that will bite.

It sells more newspapers and attracts more attention when a Staffy bites someone, rather than if a Poodle attacks a human. It’s pretty strange how people will offer an excuse for the dog if a Poodle bites someone. They’ll say it must have been mishandled by the owner or some other reason for the dog’s behaviour.

Should Staffies Be Muzzled?

Staffies are terriers, and they can very often be dog-reactive. However, this is certainly not true of all Staffies.

Large or muscular dogs have the potential to inflict a great deal of harm and cause severe injury. So, if you own a Staffy and the dog has previously shown to be reactive towards other dogs, it makes sense to put a muzzle on them while you’re out walking.

The same rule should apply to any dog, whatever the breed.