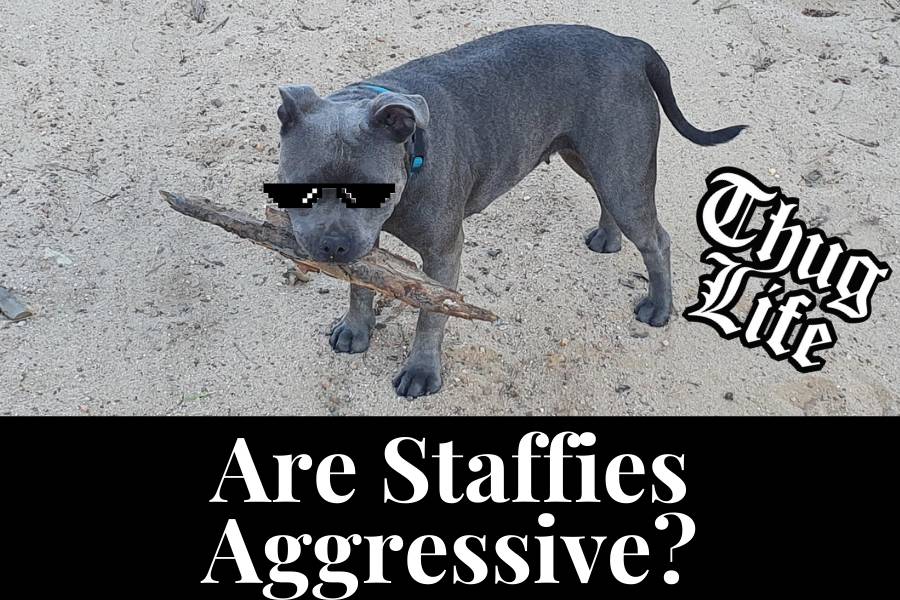 You will often hear people refer to Staffies as dangerous dogs, but are they, or are people demonising the Staffy when they know little about the breed other than what they read online or in newspapers?

A new study, undertaken in 2020 by the Royal Veterinary College, found that Staffordshire Bull Terriers are no more aggressive than any other dog breed. The study compared over 1300 Staffies to 21,000 non-Staffy breeds.

Two things work against the Staffy. First, the Staffies heritage is associated with dogfighting, and before that, bull and bear-baiting. This history has led people to believe the Staffy must be a vicious, ferocious, and unpredictable dog based on his past.

Second, Staffies are not seen in a good light because the wrong kind of people sometimes owns these dogs as a status symbol or as a means of intimidation. In fact, they do whatever possible to encourage aggression in the Staffy.

The Scottish SPCA (Scottish Society for Prevention of Cruelty to Animals) theory that the rise in numbers of Staffies requiring re-homing is because the “tough guy” image doesn’t work with Staffies because when approached, they prefer to greet them in a friendly way and not with aggression. I know it’s a serious subject, but I had to smile when I pictured a Staffy wagging his tail and trying to lick someone rather than appear ferocious; someone’s “macho” image down the toilet.

Staffies are human-oriented dogs and are desperate to please their human family. This trait is well known, and in the wrong hands, an evil owner can exploit the Staffy’s need to please, so the dog behaves in a way that isn’t natural.

Staffies are not born with an aggressive personality, the opposite in fact. Unknown to most people, owners of fighting dogs deliberately culled any dog that showed aggression towards humans, adults, and children alike.

In addition, the owners and family (which might include ten or more children) lived in tiny hovels with their dogs. Also, owners had to step in the ring with dogs that had been trying to rip each other to pieces seconds ago. None of that would have been remotely possible with a naturally aggressive dog.

Are Staffies More Aggressive Than Other Dogs?

As I pointed out at the beginning of the article, the RVC found the Staffy no more aggressive than any other non-Staffy dog breed.

The Staffy’s reputation is the direct responsibility of some of the people that choose a Staffy. Image is important, and someone that wants to look tough and intimidating isn’t going to walk down the street with a Shih Tzu on a lead; it doesn’t exactly send the right message. However, a tough, muscular and powerful dog like a Staffy sends precisely the message these people want to project.

Most people cannot tell the difference between the Amstaff and a Pit Bull; many experts cannot either. This might not seem a big deal, but it is. Because while both dogs do share a similar heritage, having been bred for bull and bear-baiting and then dogfighting, in the 1930s, breeders began to select dogs for conformation shows and what matters most is how the dog looks.

This particular line became the American Staffordshire Terrier. Meanwhile, owners bred aggression out of the dogs and began producing dogs with a calmer, more laid-back personality.

American Staffies are good-natured dogs with a loyal and friendly nature; they make fantastic companion dogs.

A Staffordshire Bull Terrier isn’t a naturally aggressive breed of dog. However, any dog can be trained or mistreated to such an extent they become aggressive. Irresponsible dog owners can turn even the most gentle dog breed fierce.

Owners can shape a dog’s personality and aggressive behavior by how they bring them up and train them.

Are Staffies Aggressive To Other Dogs?

Staffies prefer humans to dogs, that’s for sure. While many Staffies will live in harmony with other dogs in the same family, they sometimes don’t extend that friendliness to unknown dogs.

It’s crucial to socialise a Staffy from an early age. A good breeder will already have begun this process, so if you want to avoid dog aggression, you should continue with socialisation as soon as you bring home your puppy.

Once vaccinations are done, take your Staffy to puppy classes or playgroups where your puppy can interact with other dogs.

Are Staffies Aggressive To People?

Staffy’s have the nickname “nanny dog’ because of their love of children, and that says everything about the Staffy’s nature and if he’s aggressive to humans.

Are All Staffies Aggressive?

Staffies are loving family dogs, affectionate towards children, and always eager to please. You can take any dog and turn that dog into a ferocious animal if you’re so inclined.

But a Staffy correctly socialised and living with a loving and patient family will not be an aggressive dog. The UK Kennel Club recommends the Staffy as a good choice of dog breed for families.

Whereas many dogs choose to bond with one particular family member, Staffies love the whole family.