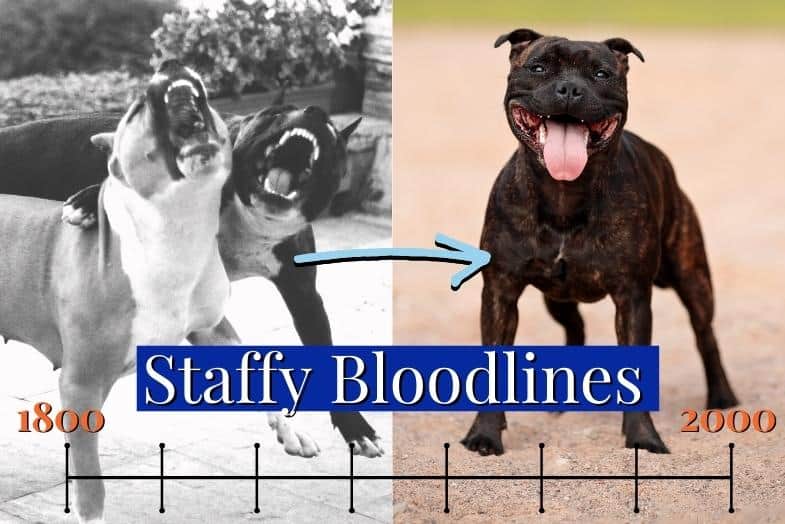 Because the Staffordshire Bull Terrier’s history goes back to the early 19th century, and there were no pedigrees back then, the factual evidence of the Staffy’s bloodlines is too obscure.

However, it’s pretty much accepted that the Staffordshire Bull Terrier we know today descended from the bulldog and terrier crosses that were prevalent in those days.

Are There Different Types of Staffordshire Bull Terrier

You might have heard people talking about other Staffy “types,” such as:

They were taken to Ireland in the 1940s to compete in the Irish Kennel Club trials. The Irish Staffy might be slighter taller with slimmer legs, but they are still a Staffordshire Bull Terrier. In addition, no renowned Kennel Club in the world recognises any other Staffy type as a separate breed, including the Irish.

Is a Staffordshire Bull Terrier a Mixed Breed?

If you go far enough back into the history of any dog breed, you will find that most of them are mixed breeds of one type or another.

Some breeds exist today that are the descendants of the original species from thousands of years ago. According to Mesopotamia clay tablets discovered in the Kurdistan region, the Kurdish Dog breed or pejdar canine is one of the dog breeds that has remained pure and unique from 5000 years ago to present.

Pejdar dogs were used in ancient Assyrian Mesopotamia to hunt wild animals and protect villages. They are giant dogs with perhaps the strongest bite force of any dog.

However, most modern dog breeds we see and hear today began life as a mixed breed.

The Staffy started life in the early 19th century as a mixed breed between the Old English Bulldog and various local terriers in existence at the time. They were originally known as the Bull and Terrier.

Bloodsports such as bull and bear baiting were incredibly popular before the nineteenth century, and spectators of any social class were more than welcome.

The early ancestors of dogs like the Staffordshire Bull Terrier would set upon and attack bulls going to slaughter.

Butchers saw this as a way of tenderising the meat. But the dogs were not allowed to kill the bulls; the aim was to get the animal worked up. Bull-baiting was also a form of entertainment for audiences, and organisers frequently arranged dog fights with bears, bulls, and other creatures.

The owners didn’t breed dogs for their cute and cuddly looks; but for their “gameness,” the ability to fight back against an opponent. Taking on a bear or bull was a great test of a dog’s bravery, strength, and agility.

In England, the government eventually banned all bloodsports in 1835. However, this forced the dog owners underground, where they organised dogfighting contests.

But regardless of how aggressive these dogs were in the ring, owners bred them never to show aggression to humans. This was crucial because handlers had to get in amongst the dogs to separate them during fights.

Owners gave these bull and terrier breeds several names, such as the Patched Fighting Terrier, Brindle Bull, Staffordshire Pit-dog, and the Bull-and-Terrier. Other similar dogs were known as half-and-halfs and half-breds.

Dogs like these came from various parts of the UK. So the amount of bulldog genes to terrier genes was influenced by which area of the country they originated.

A more common name began to emerge, the Bull Terrier, developed by James Hinks from Staffordshire, in the Black Country area of the Midlands. Some say that Hinks used Dalmations and Collies when creating the Bull Terrier, which some fans of the original bull and terrier didn’t much appreciate.

Therefore, this state of affairs led to the development of a separate breed which was to become known as the Staffordshire Bull Terrier.

Whereas, The Kennel Club does not recognise the American Staffordshire Terrier and American Pit Bull Terrier. The APBT is currently one of four dogs on the UK Dangerous Dogs list.

Where Did Staffordshire Bull Terriers Originate From?

Dog experts agree that the Staffy originally descended from the centuries-old mastiff probably brought to Britain by the Romans. These dogs, the ancestors of the Old English Bulldog, were used for bull and bear baiting.

Once the government passed the 1835 Cruelty to Animals Act, dogfighting became prevalent, and one of the main areas was in the Black Country of Staffordshire in the Midlands. To improve the dog’s speed and agility, breeders crossed bulldogs with local terriers, and eventually, after selective breeding, the Staffordshire Bull Terrier emerged.

From the first Staffies to emerge until the Kennel Club eventually recognised them took several years. Unfortunately, the authorities still harboured deep concerns about the Staffy’s heritage and close links to dogfighting and blood sports.

A dog’s bloodline is its family tree, with parents and grandparents listed several generations back.

A pedigreed dog’s bloodline must include at least five generations. However, a puppy’s lineage will reveal more than just parentage. It also offers information about an animal’s temperament, attributes, and the number of shows it has won.

When looking for potential partners, a careful breeder will study bloodlines. Suppose he is hunting for competition-quality puppies. In that case, he will know that the more recent the show victories list, the more likely an animal will produce additional show ring winners.

Between May 1935 to December 1937, around 580 Staffordshire Bull Terriers were registered with the Kennel Club.

The six sires with the most registered puppies were:

Staffy Bloodlines Up To 1946

The Staffordshire Bull Terrier Club was founded in May 1935, and by the end of the year, 159 dogs were registered with the Kennel Club. Following that, the annual additions were as follows: