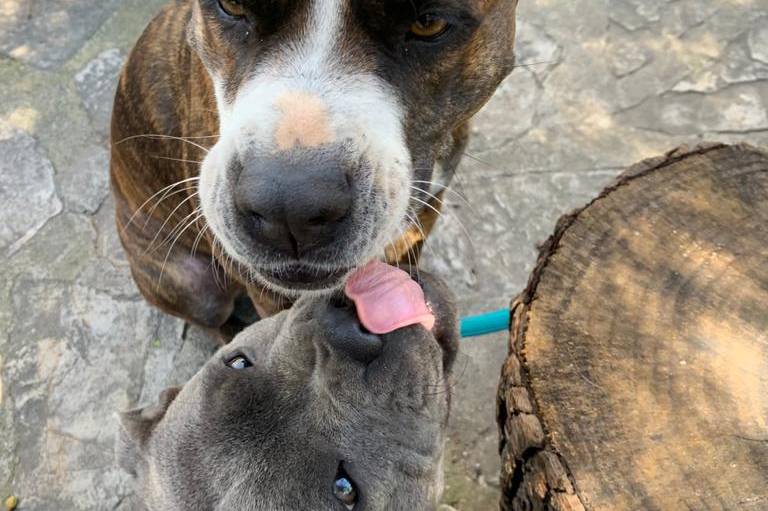 Some dogs lick more than others, but if you’ve got a Staffy, you’ve probably got a little licking machine!

We have two Staffies: Toffee, a rescue dog that’s a mix of American Staffordshire Terrier, Boxer and some other similar breeds, and Runa, a blue Staffordshire Bull Terrier that we’ve had since a puppy.

Toffee likes to lick sometimes, especially if you’re a bit sweaty. But Runa licks incessantly! Literally, she is licking non-stop and won’t stop until you insist that she does.

But why do Staffies lick so much? Is it affection? Do they like the taste? Or is it something else entirely? Here we find out.

And, if you want to learn how to stop a staffy from licking so much, make sure you read to the end.

A must-read whether you're thinking about getting a Staffordshire Bull Terrier for the first time or even if you're well experienced with them. An incredible resource.

While many people may associate salt with a bad diet. Sodium chloride, to use it its chemical name, is actually vital to human health as it is key to nerve and muscle function, while also regulation the fluids in the body. And the same applies to dogs.

But again, like humans, dogs don’t just need salt in their body, they also like the taste. You probably don’t cover your French Fries in salt for your health… it’s because you like the taste – and so do dogs!

Staffies are famously affectionate dogs. They love to cuddle and they love attention.

One of the main ways a Staffy can express affection for you is by licking you – and they certainly will do that!

Whether you like being licked or not is up to you, but the Staffy only means good by the gesture.

Especially when they’re excited, one of the ways a Staffy will show you love is by licking you. Pure and simple – they just want to say hello (while enjoying the salty goodness).

I’ve often found that licking reaches the highest of levels when the dog is excited and greeting you for the first time or when they’ve not seen you for a while.

Staffies struggle to contain themselves when they’re exited so this will typical manifest itself in three different ways: 1) tail wagging, 2) jumping, and 3) licking. And if your dogs are anything like mine, it will be a combination of all three.

Sometimes this excitement can get a bit too much – especially if your Staffy is jumping at and licking strangers. We’ll look at how you can stop your Staffy from licking at the end of this post, though.

Indeed, as Staffies love attention so much, they don’t particular like it if you’re not giving them as much as they would like – or they want to send you a message.

When I’m driving, Toffee is usually in the back seat and I get a shock sometimes when she comes up behind me and licks my ear. She does this because she is a little bored and wants to say hello.

Other times I’ll be sat at my desk and she’ll come up and lick my hand once. This isn’t really to get cuddles, but instead to let me know she either wants to go outside or she’s hungrey.

Funnily enough, Toffee had actually started to lick less. That is, until we got little Runa. Suddenly, Toffee started licking us more again – especially when Runa was getting more attention than her.

Licking can be a Staffies way of saying hello and making sure you’re giving your full attention to them.

Sometimes, though, Staffies lick themselves rather than other people. Mostly this is just them grooming themselves.

However, if you see your Staffy consistently licking their nose, this can be a sign that they are uncomfortable in a situation.

Staffies will often lick their own nose when they’re being held against their will. Dogs love cuddles, but they don’t like being held so that they can’t move (neither do you, for that matter).

It’s important to recognise when your dog is uncomfortable, especially if they’re dealing with a stranger. They might tolerate you holding them, but it can be dangerous if your dog gets scared in an interaction with a person they don’t know.

Generally speaking, though, Staffies lick people because they’re showing affection, are excited or want attention. But if it’s all the licking is getting too much, how do you stop it?

How to Stop a Staffy Licking So Much

Fortunately, Staffies are extremely intelligent dogs and are very easy to train if you know how.

If you want a Staffy to stop licking you, calmly say “No” in a relatively deep voice. You don’t need to shout, but you need to be clear that you’re being serious.

However, if you squeal “NOOO!” while giggling and rolling around, your Staffy is just going to think you’re playing and continue with the tongue attack.

Should your Staffy continue to lick after you’ve said “no”, use a gentle “Schhh” sound to indicate that’s enough licking for now. If they still continue, make the “Schhh” sounds a lot sharper and stop giving them any attention whatsoever and move them away if necessary.

Training a Staffy to stop licking for good takes time and consistency. This means that you have to immediately stop them (either with a “no” or a “schh”) whenever they started licking you or anyone else and don’t give them any attention until they obey your command.

Your Staffy loves attention, so if you want them to stop licking, take away your attention until they do.

COMMENT BELOW: Have you got a Staffy that loves to lick? If so, do you ever let them lick your face or is that too much?

Pete is the founder of Staffy Dog and the proud owner of two Staffies: Toffee (Amstaff mix) and Runa (Staffordshire Bull Terrier). When he's not playing with his dogs, Pete is a keen writer, an avid sports fan and an advocate for urban cycling.

link to Are Staffies Good Guard Dogs? [NO! Here's Why]

Staffies are excellent watchdogs providing you have socialised them from a very young puppy. Once Staffies are a little older, they are very sensible dogs and will protect you and your family, but do...

Continue Reading
link to Staffordshire Bull Terrier Adoption: How to Adopt a Staffy